Our goal is to offer the highest quality mortgage resources and advice to our users for free.

How We Make Money

The listings that appear on this page are from companies from which this website and the data provider may receive compensation, which may impact how, where and in what order products appear. Compensation is higher for featured placements. This table does not include all companies or all available products.

We may receive a fee if you click on a lender or submit a form on our website. This fee in no way affects the information or advice we provide. We maintain editorial independence to ensure that the recommendations and insights we provide are objective and unbiased.

Gender and racial inequality has emerged as one of the most important issues of our time.  Disparities between women and men as well as between different racial groups exist within multiple areas of society including pay, employment opportunities and housing.  While significant attention has been paid to income gaps, it is also vital to examine the impact of gender and race in the housing market.

The recent release of the Census Bureau household income report for 2017 provides a new framework for examining these crucial social subjects.  The report contains a tremendous amount of interesting information on incomes including breakdowns by gender, race, geography and other factors.  The report was generally viewed positively as median household income increased 1.8% and hit an all time high of $61,372.

While the headline income figures are relatively positive, a deeper dive into the data reveals a more complicated story.  When viewed on a more granular level and applied to housing, the household income report reflects a housing market that is fractured along gender and racial lines and becoming less affordable.

The Relationship Between Household Income and Housing

Income and the housing market are inextricably linked.  Simply put, how much money you make is the most important factor in determining what size mortgage you qualify for which ultimately determines how much home you can afford.  Other inputs such as your down payment, monthly debt expenses, credit score and mortgage rate also play a significant role but housing affordability starts with your income. The more money you earn, the higher price home you can afford.  The less you make, the less home you can afford. So while the Census Bureau report addresses household income, we can use the data to learn a lot about the housing market.

While housing affordability affects everyone, its impact is magnified when the issue is analyzed by gender.  Specifically, the housing gender gap widened based on the latest census bureau data. Reported median male household income of $60,843 was approximately 46% higher than median female household income of $41,703.  The report analyzes different types of households and these figures are for family households with only one spouse present, such as a household with a single mom or dad whose children live with them. No matter what definition you use, the gender household income gap is striking and the implications for housing affordability are equally significant.

The chart below shows how much house you can afford based on median female household income, median male household income and the median income for all households.  For the purpose of this example we used our mortgage qualification calculator to determine what size loan a household could afford and assumed people spend on average 6% of their gross income on non-housing debt expenses such as credit cards, auto and student loans.  We also assumed the average home buyer makes a down payment of 10%. 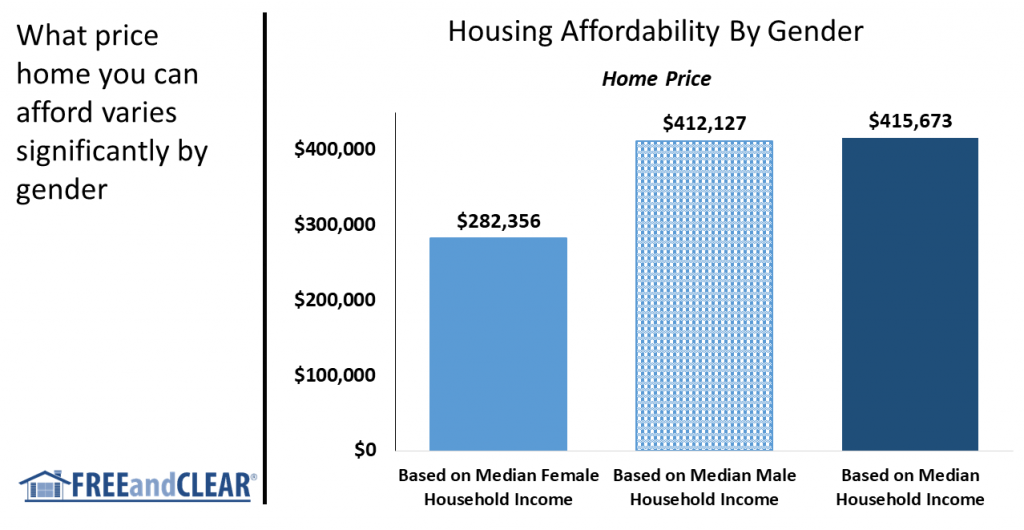 Source: FREEandCLEAR, based on 2017 median household income for female and male family households

The report also enables us to better understand the relationship between race and housing.  A wide disparity in household income exists among the four racial groups used by the Census Bureau — Asian, Black, Hispanic and White — and these differences certainly influence housing affordability. 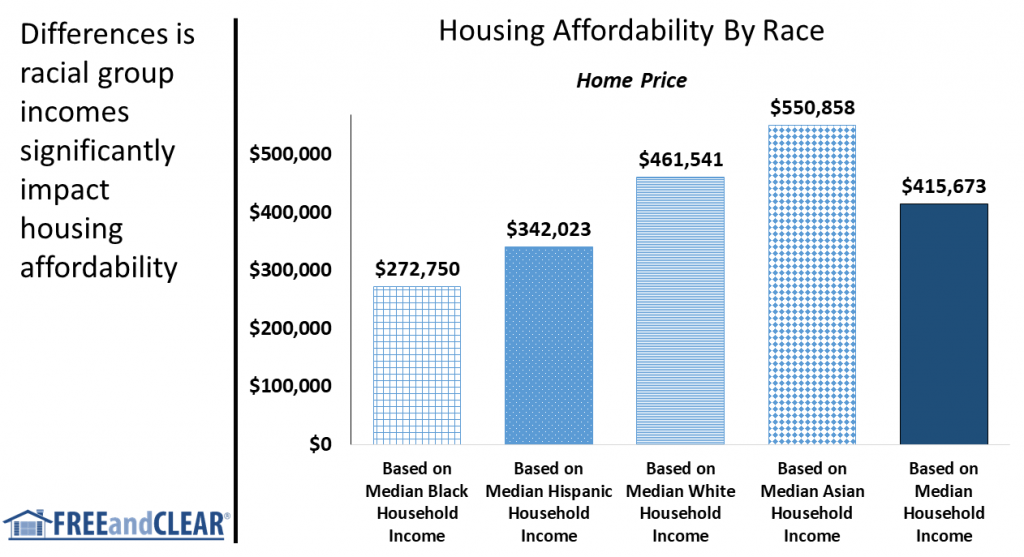 Source: FREEandCLEAR, based on median household income by racial group

While issues of race and housing are complex, there should be no debate that the income differential has a profound impact on how much home people can afford.  Income disparities also affect neighborhood access and housing mobility for lower-earning racial groups.

While it is good news that people are making more money, the growth in household income is decelerating.  Median household income grew 1.8% in 2017 as compared to growth rates of 3.1% and 5.1% in the two prior years.

Slowing income growth is not necessarily a bad trend as long as the items you want to buy, such as housing, grow at a similar rate. If prices for the goods you want to buy increase at a faster pace, your dollars do not go as far and the item effectively becomes more expensive.  Unfortunately, housing prices increased at a much higher rate than median household income in 2017, which means that people could afford less home for their money, despite earning a higher income. 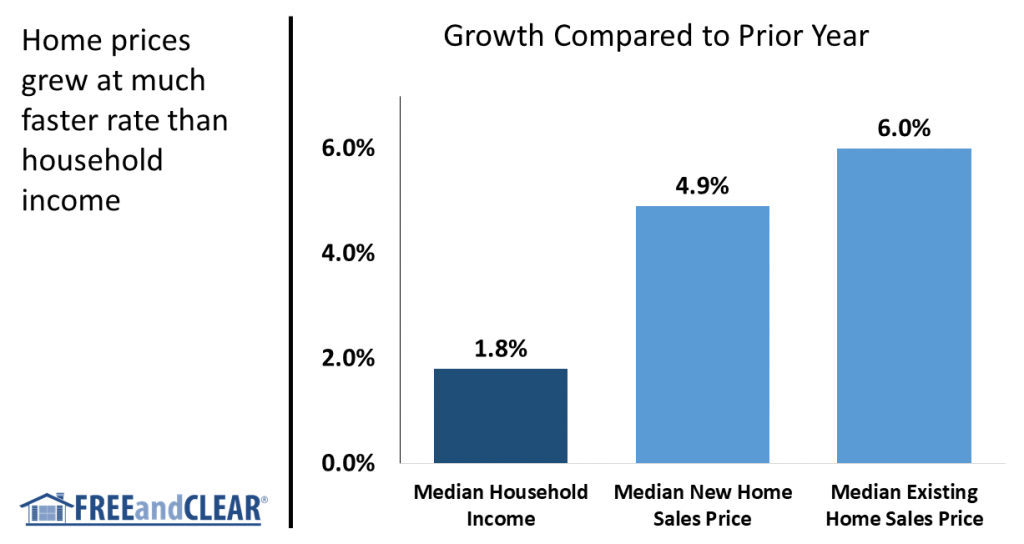 The chart confirms what most people who shopped for a home over the past several years already knew on a more personal level — buying a home is becoming more expensive and your housing dollars do not buy as much home as they used to.

This dynamic manifests itself in the housing market in several ways. First, people may not be able to afford the house they want to buy.  They may settle for a two bedroom home instead of the three bedroom home that is more suitable for their family. Other people may be priced out of certain neighborhoods.  In short, as homes become more expensive, your housing options become more limited, especially if you find it challenging to qualify for the mortgage you need to buy the home you want.

But Housing is Still Affordable (At Least on a National Level)

Although the household income data reveal significant gender and racial housing affordability gaps and that buying a home is becoming more expensive, one positive take away from the report is that housing remains affordable, at least at the highest, most macro level.

As the chart shows, even with these relatively conservative assumptions, the $415,637 home price you can afford based on median household income is greater than both the median existing and new home sales prices. 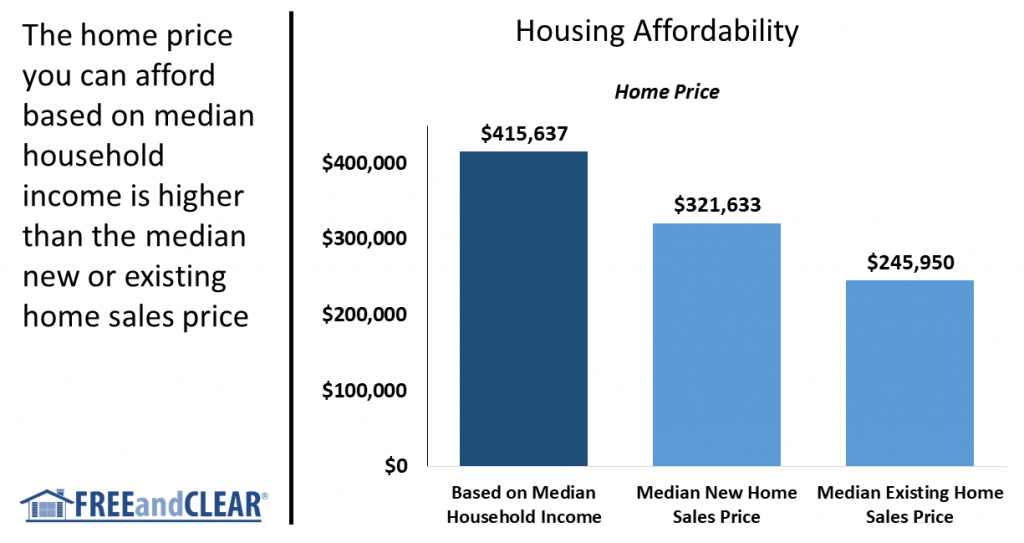 It is important to emphasize that the above analysis is based on national data and that incomes and housing prices vary greatly by city and neighborhood.  While housing may be affordable on a national basis, your area may have a very different dynamic. Plus we have already shown how gender and race factor into housing affordability.

Although the link between income and housing affordability is clear, there are several caveats regarding the Census Bureau data.  Although the report was released recently, the median household income data are for 2017. So while this is the most updated information available, it is somewhat dated.  Despite this, housing prices have continued to rise over the course of this year, albeit at a slower pace, while home sales have moderated, suggesting that the crux of the analysis remains applicable.

Additionally, while the primary purpose of the Census Bureau report is to examine trends in household income, it can be used to explore and analyze other important socioeconomic topics.  In this case, we used the report and its valuable data to better understand the complex relationship between income, housing affordability, gender and race. We shine a light on these important issues with goal of creating a more fair, affordable and accessible housing market.

FREEandCLEAR is a leading mortgage website that offers free tools and resources that empower people to find the mortgage that is right for them.  FREEandCLEAR was developed by a father and son team who are on a mission to help people make better decisions and save money when they get a mortgage.  Our valuable resources and mortgage rate tables put borrowers in control of the mortgage process and enable them to easily shop for a mortgage.

%
Current Mortgage Rates in Ashburn, Virginia as of May 25, 2022
View All Lenders

Data provided by Icanbuy, LLC. Payments do not include amounts for taxes and insurance premiums. Read through our lender table disclaimer for more information on rates and product details.
About the author
Michael Jensen, Mortgage and Finance Guru

Michael is the co-founder of FREEandCLEAR. Michael possesses extensive knowledge about mortgages and finance and has been writing about mortgages for nearly a decade. His work has been featured in leading national and industry publications. More about Michael